SCIAMVS means “let us know” in Latin (not “let us ski”). First, it was thought that this might be an acronym for a more complete title such as Sources and Studies in Classical, Chinese, Indian, Japanese, Arabic and MedieVal exact Sciences.

Then, some members of the founding editorial board began to ask, with good reason, “what about Babylonian science?” or to object that “Arabic or Indian refer to region, while Classical or Medieval indicate period,” which is a confusion of two distinct categories, and so on. In the end, the acronym was abandoned, but the name was was kept, SCIAMVS (with “V” not “U”), since it is so suitable for a journal for the sources of lesser known sciences of the past.

As discussed by Michi Yano, in the Preface of the first volume, the idea for SCIAMVS was first conceived of by Ken Saito, in 1997, along with the name. The original plan for the new journal was formally set out in 1999, as follows:

Shortly after publication of the inaugural issue, Michio Yano, the first Chief Editor, received the following postcard from the participants of a meeting on the history of the mathematical sciences held at Bellagio: 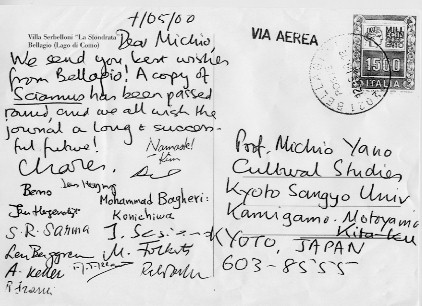 Yano was very happy to receive the card, and his only regret was that he himself was not present at this meeting.